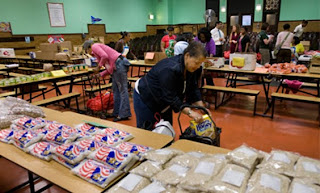 When the U.S. Census Bureau announced last week that the national poverty rate had reached its highest levels since 1993, no one seemed particularly shocked.
Among the least surprised: staff members at the Greater Chicago Food Depository and its partner agencies, who have witnessed, first-hand, the effects of deteriorating economy—and the subsequent increased demand for food assistance.
Now a new set of numbers underscores just how difficult times have become for families and individuals in the Chicago area. The Food Depository released a study today
Among the key findings in the study, released at the Third Annual Lillian and Larry Goodman Hunger Forum:

The scope of the demand is glaringly evident at Food Depository agencies — the food pantries and food distribution centers across Cook County where families and individuals are able to secure desperately needed food — and support.
Wendy Vasquez, Executive Director of Ravenswood Community Services, says traffic at their food pantry doubled between 2007 and 2009, during the height of the recession. Participation continued at 2009’s high levels – until recently. “We’ve seen an incredible spike this summer,” said Ms. Vasquez. “One night a few weeks ago, we hit a very unfortunate milestone when we provided groceries to more than 400 people or households.”
“The line of people waiting for our pantry and kitchen to open consistently wraps around the corner and down the block,” Ms. Vasquez said.
Lisa Haskin, of the Harvest Food Pantry in Evanston, has witnessed a similar trend. “The number of families we serve each month increased drastically – by about 50 percent – in July of 2009,”
“We’re definitely seeing more people struggling financially because of job loss,” said Ms. Haskin. Widespread job losses were responsible for the initial bump in demand at local pantries, and a dearth of new jobs has kept food agencies busy in succeeding years.
Mary Nash runs the food pantry at Grace Missionary Baptist Church in Markham. “People are feeling very pessimistic,” she said. “Within the last three months, 12 or 15 people I’ve talked to have lost their jobs. And they just can’t find work.”
Ms. Vasquez, Ms. Nash and Ms. Haskin report that while their traditional clients – older people on fixed incomes – continue to rely heavily on pantries for food, a new population, made up of families and young adults, has joined them. This demographic shift, an unwanted souvenir from the ongoing recession, underscores a difficult truth: Food insecurity has become a difficult fact of life for many families in Cook County.
That daily struggle, said Ms. Vasquez, takes its toll. “It feels like most people are becoming less optimistic,” she said. “Those who’ve lost their jobs and have gone without work for a long time are losing hope. There are anecdotal stories of good ‘new job’ news, but those seem to be limited.”
Meanwhile, Ms. Nash said she counsels clients to “keep the faith,” even in these economically bleak times. “I try to uplift their spirits,” she said. “But I know that doesn’t pay the bills.”