Martin and Melissa Adame are grandparents of eight. Three of them, ranging in age from six to 15, live with them along with their dad, the couple’s son.

“They call me mom instead of grandma,” Melissa, 57, said with a smile. Melissa and Martin Adame at the Maywood Lunch Bus stop.

The Maywood couple recently walked to the Miracle Revival Cathedral to pick up boxes of food for their grandkids. In a difficult year, the family has turned to the church’s food pantry for help. And since summer began, they’ve also visited the Food Depository’s Lunch Bus, the Food Depository’s mobile distribution of free summer meals for any child in need. The Adames appreciate the help as they face financial struggles. Melissa hasn’t been able to work since she was diagnosed with breast cancer in 2012. Martin, 60, typically works in construction, he said, but he has been sidelined for the past year with multiple surgeries and a hernia.

“We’ve been leaning on this church and these people,” Martin said, thumping the box of meals with his knuckle for emphasis.

As they navigate these hardships, Melissa didn’t hesitate when asked what keeps her going each day. “My family,” she said. “I’m the strong one right now.” As one of the local sponsors of the federal summer meals program, the Food Depository provides thousands of families with youth meals during the summer. Including the Lunch Bus stops, the Food Depository is partnering with more than 130 sites to keep kids fed across Cook County. Child hunger has soared during the COVID-19 pandemic as families continue to deal with the economic fallout. According to the most recent estimates from Feeding America, as many as 1 in 6 children in the United States – or about 13 million – may face hunger this year. All photos were taken by Nancy Stone for the Food Depository at the Lunch Bus stops in Maywood, Berwyn and South Lawndale. Three generations stopped by the  Berwyn Lunch Bus to pick up food: Ten-year-old Musa Sanchez, her mother Aoa Castillo, and Musa’s grandmother – and Aoa’s mother-in-law – Maria de la Luz Sanchez. They drove from Pilsen to pick up meals for Sanchez and her cousin, Castillo’s’s nephew.

The meals help,  Castillo said, especially with rising food prices at the grocery store. It also helps to keep her daughter and nephew nourished amid their busy summer schedules. Sanchez and her cousin participate in gymnastics and swimming, and Sanchez – who will be going into fifth grade this year – does a weekly reading program through Chicago Public Library.

Aida Salazar was at the La Villita playground in South Lawndale with her two sons – 6-year-old Cresencio and 4-year-old Conrado – when she noticed the Lunch Bus for the first time.

“It’s feeding the kids of the neighborhood, so that’s great,” Salazar said. “Especially right now when they don’t go to school.” Sisters (from left) Melissa Alonso, 17, Giselle Moreno, 7, and Kayla Moreno, 11, visited the Lunch Bus with their mother and grandmother. Tanya Butler, 64, visited the Maywood Lunch Bus to pick up meals for her 8-year-old granddaughter, who she’s watching while her parents are on an anniversary trip. Butler works as a mental health counselor for Loyola University by night and helps teach special education students by day.

Between two jobs and serving as a regular volunteer for the Miracle Revival Cathedral food pantry, having access to the meals is both a money- and time-saver.

“It saves time trying to plan a meal,” she said. “It’s already prepared.” “I told my kids we’re going to have a picnic!” said Elva Guerrero. She and her three kids – 13-year-old Martin, 8-year-old Ana, and 6-year-old James – stopped by Lunch Bus stop at La Villita Park. 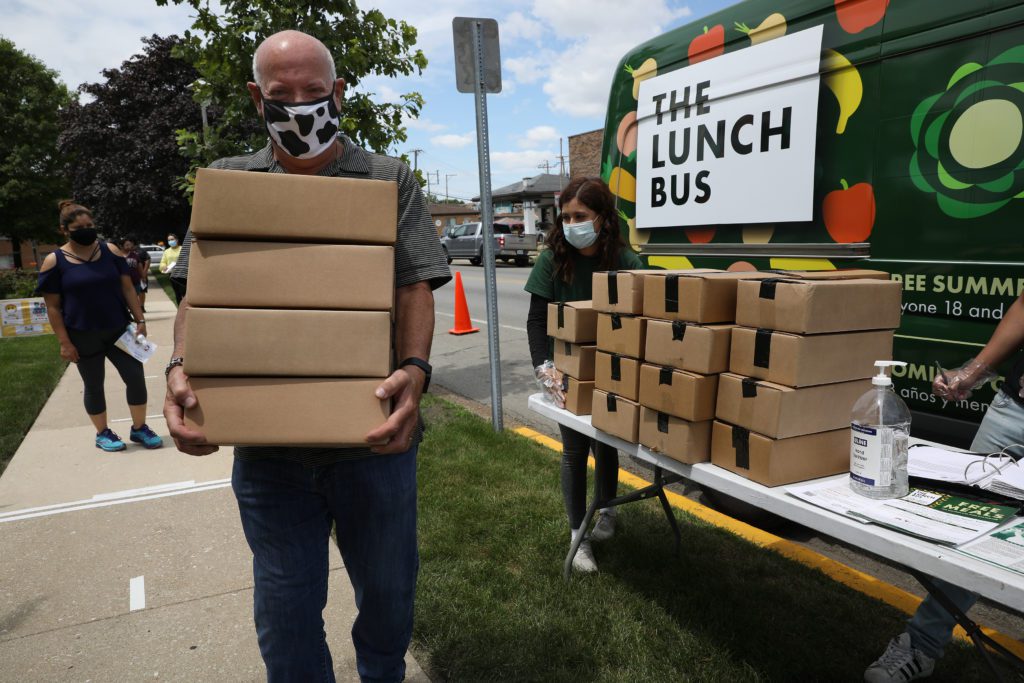 Larry Portnoff of Cicero picked up meals for his granddaughters – one of whom is going into her junior year of high school and the other just graduated kindergarten. Portnoff, 73, made the trip to help out his daughter, a schoolteacher who lives in Berwyn.

He said he’s thankful that the community has a place he can come pick up food for his family.

“Not only is it just saving money, we’re thankful that what we have is really beneficial for us health-wise,” he said. “The food is very good, very healthy.”