Working at a food bank in the middle of a pandemic, as Jose DeSantiago describes it, feels like you’re going through the longest day ever, every single day.

But the warehouse manager doesn’t complain about his new normal, which includes some recent 13-hour days and six-day work weeks.

As an integral member of the Food Depository’s response to the need caused by COVID-19, whose efforts were recently featured in Crain’s Chicago Business, DeSantiago doesn’t view it as more work or pressure. The Chicago native considers it his way of giving back in these unprecedented times and ensuring people in his community have enough food on their tables.

“To me, it’s me doing my part,” DeSantiago, 29, said before the sun was up on a recent Friday morning. “I know there’s a lot of people in this organization that do big, big things. This is my way of doing my big thing.”

That morning, all while maintaining a six-foot distance, his team swiftly moved around the warehouse on the city’s Southwest Side. They pulled cases of canned fruits and veggies, peanut butter, pasta and other staples off the shelves and prepared them for deliveries. DeSantiago oversees the millions of pounds of food that come through the Food Depository’s doors, which are later distributed out to Cook County’s hundreds of pantries, soup kitchens, shelters and other food assistance programs.

This public health and economic crisis also brings new challenges and responsibilities. DeSantiago didn’t hesitate to jump right into action, according to his supervisor, Joe Rodriguez, the Food Depository’s senior director of operations.

“He said (to me), ‘I want the Food Depository to know they can rely on operations to get the job done,’” Rodriguez recalled. “‘You give us the football, we’re going to score the touchdown every single time.’”

Stepping up to meet new challenges

In the early weeks of the outbreak and the state’s shelter-in-place order, not only did the Food Depository have to reconfigure volunteer projects to support social distancing, but volunteer participation also dropped. This happened at the same time the food bank needed more help to produce thousands of non-perishable food boxes to provide to community partners serving those affected by school and business closures. 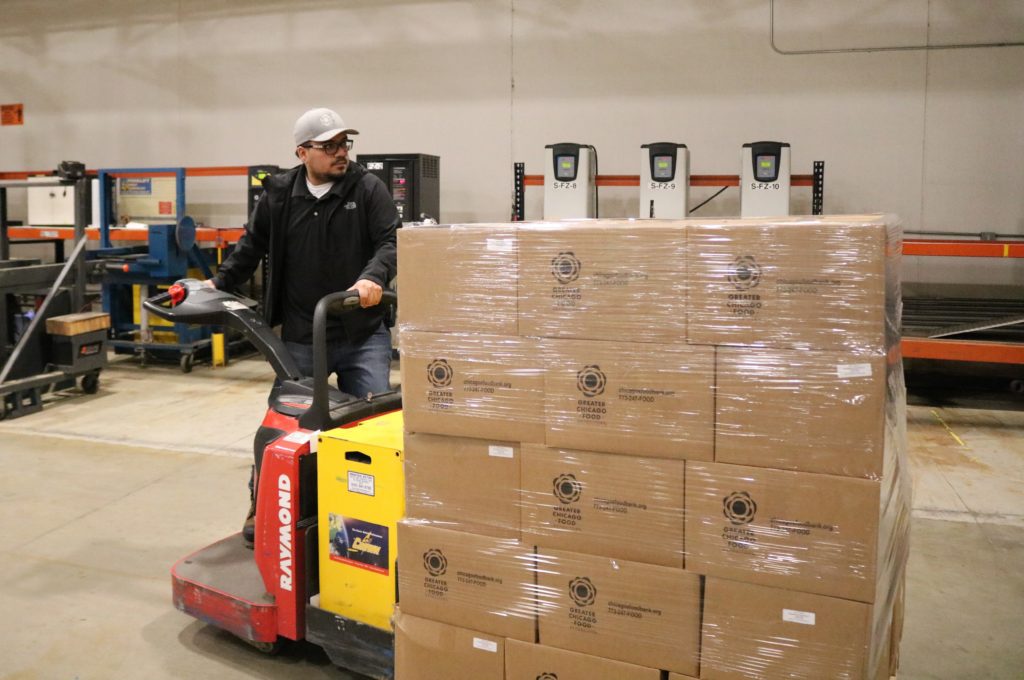 Warehouse manager Jose DeSantiago fills a Food Depository truck with non-perishable food boxes to be stored at the United Center. Staff and volunteers have been producing the boxes to support families affected by COVID-19.

To fill in the gaps, DeSantiago rallied members of the warehouse crew and turned a shipping dock into their own box-packing assembly line. To make time in the afternoon for this extra task, he and others would start their day as early as 4 a.m.

He’s also taken the lead on one of the organization’s most pressing logistical challenges: where to store this wave of new inventory, especially with volunteer projects taking up more of the warehouse than ever before. Under his management, the Food Depository moved more than 770,000 pounds of food to the United Center. Local film studio Cinespace also donated 20,000 square feet of storage room. This donated space, he said, frees up more room for food coming in and volunteer projects. More than 770,000 pounds worth of food boxes are currently being housed at the United Center

A family legacy of service

DeSantiago was raised in the Little Village neighborhood, not far from Food Depository headquarters, and currently lives in West Lawn. Service seems to be a part of his DNA, with his entire family working on the front lines of this pandemic in some way. His mother and sister are local nurses. His brother, a member of the U.S. Navy, is currently volunteering with non-COVID patients at a Florida hospital.

“To me, it’s me doing my part. I know there’s a lot of people in this organization that do big, big things. This is my way of doing my big thing.”

He’s worked at the Food Depository for nearly nine years. During his time here, the closest experience he’s had to the current situation – in terms of both need and workload – was when he went to assist Louisiana food banks following the state’s historic floods in 2016.

But DeSantiago doesn’t go more than a few seconds without giving nearly all the credit to his 20-person team. He recalled the sense of relief they all felt after Mayor Lori Lightfoot’s announcement that essential businesses would stay open.

“They know that it’s crunch time; it’s time to step up. So they challenge themselves to make sure everything that needs to get done gets done,” DeSantiago said of his team.

It’s been a difficult few months, and he knows the effects of the pandemic are far from over.

“It’s a mission that’s going to be really hard to accomplish,” DeSantiago said, “but with the route that we’re taking, we’re moving in the right direction.”