The 1 in 5: Giving back to the community 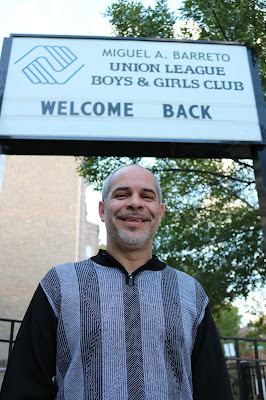 When Hector Perez was a child, he spent most of his days hungry.

“Sometimes, my brothers and sisters and I would each be given one banana for dinner,” he said. “Or, dinner would be white rice and ketchup or a fried egg.”

Hector grew up in the Humboldt Park community. His father passed away when he was young, so his mother raised him and his brothers and sisters. The family received food stamps, but often food didn’t last the entire month.

“Sometimes by the second week of the month, our food stamps were gone. I’d go home and lay in bed unable to sleep because my stomach hurt because I was hungry,” Hector said.

He knew he needed to start supporting himself, so when Hector was 14 years old, he got a summer job at the Union League Boys & Girls Club near his home.

“That’s really where my life started,” he said.

The Club helped stabilize Hector’s life and gave him direction. But, when he was enrolled, the Club did not have a meal program to address the need among children in the community.

After spending 17 years in retail, Hector returned to the Club as Senior Director. He knew that children were still going to bed hungry in the community and began a partnership with the Greater Chicago Food Depository to offer Kids Cafe meals every day at the Club.

“It’s a struggle in this community,” he said. “People are out of work, families are making tough calls. Do I pay for electricity or do I buy food? And you know what? A lot of the time it’s the bills that get paid.”

Now, the Club serves healthy, nutritious meals to hundreds of children each week.

“These children are so happy to get the meals,” he said. “Families who struggled like mine will know that their children are getting the food they need to stay healthy.”

The Food Depository administers Kids Cafes, which are funded federally through the Child and Adult Care Food Program (CACFP). CACFP is just one of the programs authorized by the Child Nutrition Reauthorization. To learn more about Child Nutrition Reauthorization and how to advocate for strong children’s programs, visit chicagosfoodbank.org/advocacy.