“I can make magic,” he said with a smile while looking down at the cart of groceries he picked out from his local food pantry. He cooks not only for himself, but sometimes for his neighbors in his apartment building.

Thomas, a 62-year-old Navy Veteran, has been visiting Broadview Services Center food pantry in the west suburbs for the last three years. He receives Social Security Disability benefits after back and knee injuries left him unable to work. Before that, he held general labor jobs. It can be a challenge to make the benefits last all month, he said. The pantry helps fill in any gaps, and he enjoys the company of the longtime volunteers.

Thomas is one of dozens who visit Broadview Services Center – a Food Depository partner – every week. After nearly two years of serving people via a phone order system because of the pandemic, the pantry’s team has recently switched back to serving guests in person inside the Broadview Community Presbyterian Church basement.

Growing to meet the need

As they return to pre-COVID norms, the pantry space is undergoing renovations as the result of a Food Depository capacity-building grant. The grant funding is not only improving the look and efficiency of the pantry, but also allows them to serve more households in need, according to director Judy Brown-Marino. Julie Stokes (right) picks out groceries at Broadview Services Center. The pantry recently moved its distributions back indoors for the first time since the start of the COVID-19 pandemic.

Broadview Services Center, which has been around since 1995, has historically served households in its namesake village and those living at the Hines VA Hospital just a mile down the road. As part of the pantry’s ongoing expansion, which includes adding refrigeration, shelving, and other storage space, its service area grew earlier this year to include those who live in nearby Riverside and North Riverside.

“There’s such a definite need for this in this area,” Brown-Marino said.

With the grant, Brown-Marino was also able to purchase new floors, tables, and air conditioning, among other improvements. In the coming months, she plans to install a stair lift for older adults who currently can’t travel down the church basement stairs and an outdoor canopy to make the wait outside the church more comfortable. 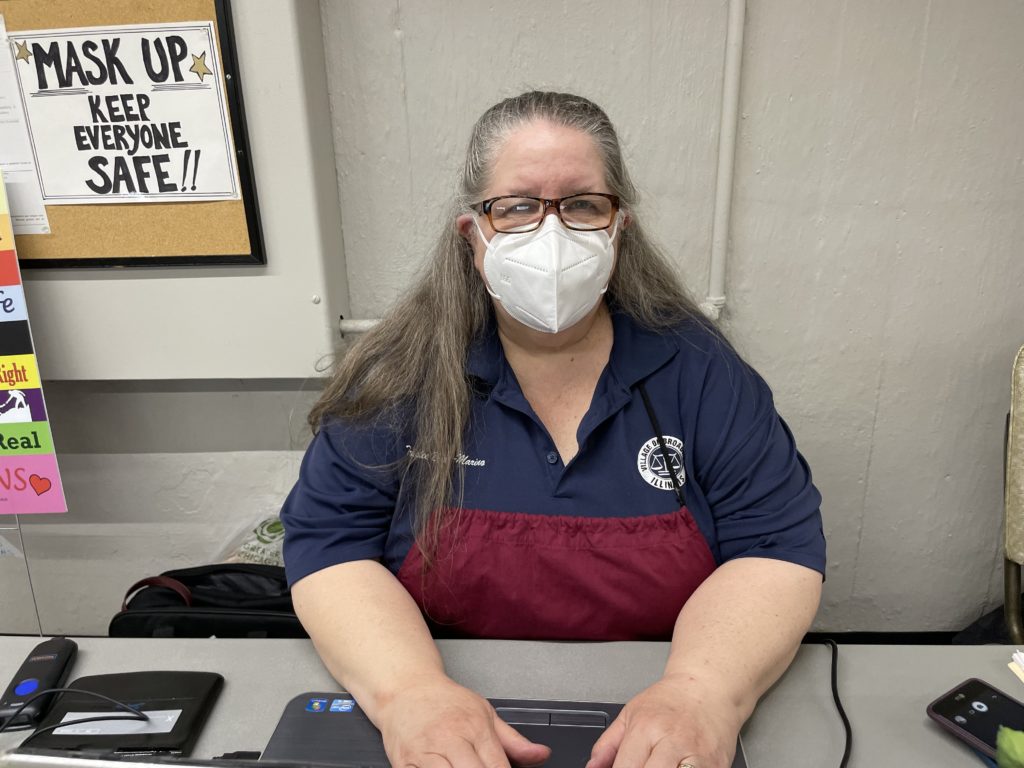 The changes make a “phenomenal” difference to the site, Brown-Marino said, especially as the pantry transitions back to the indoor distributions. Though the Broadview team changed the way it operated during COVID, Brown-Marino proudly noted that they never stopped offering guests a choice in what food they received. Every week,  Brown-Marino would make lists of what was available and she and her team of volunteers would take orders over the phone. Then, households would either pick up their food or volunteers would make deliveries.

The increased workload that came with serving amid the pandemic, combined with the new remodel, has made Brown-Marino confident in her team’s ability to serve new neighborhoods in their area.

“We can certainly accommodate more people with the space that we have,” she said.

During a recent summer morning distribution, Shirley Redmond stood behind the pantry’s fresh produce table. When a guest was unfamiliar with tomatillos, one of their offerings, she would list dishes that they may recognize them from – like salsa and tamales – and suggest trying some at home.

When the pantry receives new fruits and vegetables, Redmond — who’s been volunteering at the pantry for more than a decade — said she likes to encourage people to try something different by offering ideas or explaining the nutritional value.

“These are the kinds of things they’ll pass up in the store because they can’t afford it,” Redmond said. Redmond, 77, has lived in the area for nearly 40 years. She retired from teaching high school special education in 2010 and started regularly volunteering soon after.

Her father also supported his community through food. Growing up on Chicago’s West Side, Redmond said he turned a vacant lot next to their home into a garden and used it to feed their neighbors. Having him as a role model, she said, inspired her to give as much as possible.

“Growing up, we weren’t wealthy,” she said. “We didn’t have a whole lot. Being able to give people the opportunity to have nutritious food is wonderful.”

Brown-Marino is also grateful for the chance to give back. A retired village trustee, she enjoys the chance to continue serving her community in a different way.