When 35-year-old Tiffany Evans visited the New Life Covenant Southeast food pantry for the first time, she was greeted by a roar of supportive cheers from workers and visitors.

It’s a ritual at the pantry in the South Side neighborhood of Grand Crossing. As guests reach the front of the line to receive food, newcomers are announced by the volunteer greeter – a call that prompts the group to erupt in applause. “It makes you feel love, like, welcome,” Evans said about the cheers on a recent summer afternoon at the pantry. And, as for every visitor who walks through the doors, her welcome also included a warm embrace. Since opening five years ago, New Life Covenant Southeast has been nicknamed “the hugging pantry” by its patrons. The pantry – one of the Greater Chicago Food Depository’s partner agencies – prides itself on being a “family,” according to coordinator Jackie Kabir, and treating their clients as such. It feeds between 400 and 600 households each month, Kabir said. The volume has increased since its opening, which she credited to word-of-mouth referrals and no longer having neighborhood restrictions on who can receive food. Tiffany Evans, 35, goes through the line at the New Life Covenant Southeast food pantry on a recent summer afternoon. It was her first time at the pantry.

“We don’t treat them like people who just come through here,” Kabir said on a recent summer afternoon before the pantry opened its doors for an afternoon of service. “They’re an extension of what we do and what we feel like our mission is.” The need is immense in the Greater Grand Crossing community, which ranks among the most economically challenged of Chicago’s community areas, according to American Community Survey Census data. More than half of the population lives below 185 percent of the federal poverty line – a common income threshold for some forms of government assistance. The child poverty rate in Greater Grand Crossing, 55 percent, is more than double the rate of Chicago as a whole, according to the Census data.

An emotional experience leads to calling

The mission of feeding community members is personal for Kabir, who has been running the pantry for the last two and a half years. After losing her job as a technical consultant during a merger at the same time as going through a divorce, Kabir said, she struggled to feed her family. Kabir has three daughters, currently ages 24, 19, and 8. The youngest, Aziza, was a hardworking member of the volunteer team on the recent afternoon at the shelter, hustling to restock items like cartons of eggs and milk as needed. About a year after her job loss, Kabir recalled, she prayed about her situation and felt that God called her to the food pantry. “It was a very emotional experience for me because I never thought in a million years that I would be someone who needed a food pantry,” Kabir said of her first visit. The treatment she received left a lasting impression. “How everybody treated me, how they hugged me when I walked in the door, told me I was going to be okay, this was not going to be my situation always, things like that, (it was) very encouraging,” Kabir said. That same day, Kabir decided to become a volunteer and, three months later, she was asked by the outgoing coordinator to take over the position. Today, what Kabir says keeps her going with this work is her ability to relate to those who walk in the doors. She tries to promote compassion and kindness within those working at the pantry. “It’s different when you’ve never been in their shoes, to understand,” said Kabir. “So I feel like I have an insight to how they think, how they feel, that I should share with volunteers whenever they come here.”

Volunteers spread a legacy of love

The hugs, like the one Kabir received on her first visit, as well as the announcement of first-timers are courtesy of 88-year-old greeter Madeline Gantt. She’s known by pantry workers and patrons as “Mama Gantt.” Gantt, who has lived in the neighborhood — and in the same house — for 63 years, has worked with the pantry since its founding. There are some people, Kabir noted, who come in and simply ask for their hug. Madeline Gantt, known at the New Life Covenant Southeast food pantry as simply “Mama Gantt,” gives a hug to everyone who comes into the pantry.

“I love people, and I love to be loved, and that’s a way to show it,” Gantt said.

William McKenzie of the South Shore neighborhood said he feels the love and respect when he comes to New Life Covenant. The 70-year-old retired housekeeping worker visits the pantry to get groceries for his household, which includes his wife, who’s also retired, his 24-year-old daughter and his 7-year-old grandson. He receives Social Security as well, but he said he’s grateful for the pantry because it allows him to have what he needs rather than having to ask a neighbor if he’s without. “You do what you gotta do to survive, to make it,” said McKenzie. Volunteer Freddi Woods, 64, handed out bags of shredded cheese and bottles of salad dressing from her seat on the distribution line. Woods also knows what it means to be on the cusp of hunger. About seven years ago, Woods said, she experienced homelessness and didn’t know where her next meal was coming from. She had suffered two strokes among other health challenges. Since that time, Woods’ fortunes have improved, though her rheumatoid arthritis is severe enough to require use of a wheelchair. But she has housing and food, and she wants to give back. “I don’t want people to go through what I went through,” said Woods, who has volunteered at the pantry for about three years. “And I don’t think anyone in the United States of America should ever go hungry.”

One of the pantry visitors that afternoon, 34-year-old Shawn Hopkins, has been struggling with homelessness this past year. He said he was evicted following the death of his grandmother. There’s a shelter he goes to during the day for hot meals, but receiving food from the pantry “means everything,” Hopkins said. His box of beans, apples, oranges and meat will last for a week, he said, adding that he plans to share it with his two daughters, ages 10 and 4, who live with their mother. Hopkins hopes to find work soon, ideally a job that allows him to help other people with similar struggles, and move into his own apartment, he said. “I would want to do something exactly like they’re doing; giving back,” Hopkins said, referring to New Life Covenant’s staff and volunteers. “Because I know the pain you suffer when you lose it all.” 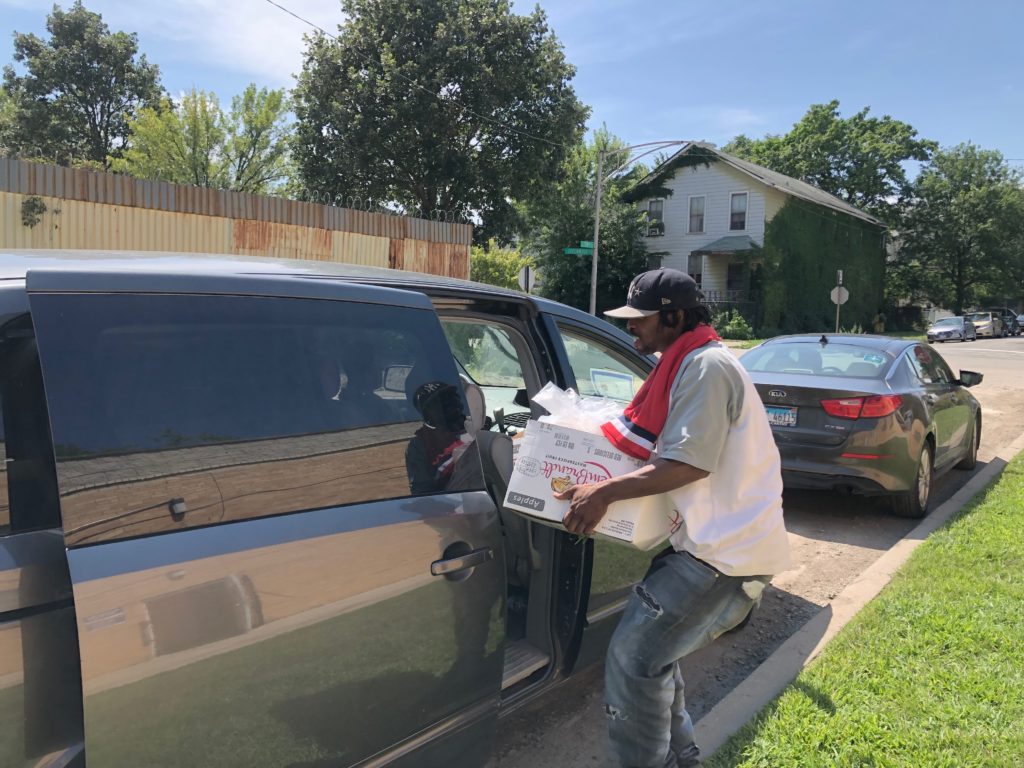 At New Life Covenant, Kabir said, it’s not just about the food. They hope to lift spirits, too. “Some people may walk through the door in one mood and hopefully they go out in a better mood, with more optimism than when they walked in,” said Kabir.