On a recent morning before the sun was up, a Greater Chicago Food Depository truck backed up to a loading dock at offices for Transportation Security Administration workers at Midway International Airport. Food Depository staff and TSA workers then unloaded more than 200 boxes of food – rice, spaghetti, canned fruits and vegetables, and more – as well as fresh produce. It was just the beginning of a busy week in our response to the shutdown, which has already increased hunger in our communities.

A Food Depository employee unloads a truck full of food for TSA workers at Midway airport.

For the first time in its 40-year history, the Food Depository delivered food directly to federal workers, distributing 1,295 boxes of food to TSA workers at Midway and O’Hare International Airports, workers with the Federal Bureau of Prisons, and Coast Guard service members. We’ve also urged any federal workers or contractors needing food assistance to visit any food pantry or mobile distribution in our vast Cook County network. “We’re proud to stand with the federal workers, but it’s terrible that they’ve been put in this position. We hope the White House and Senate leaders will reach an agreement to end the shutdown for good,” said Amy Laboy, the Food Depository’s senior director of programs, who organized the shutdown response. 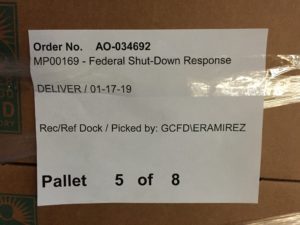 For the first time in its 40-year history, the Food Depository delivered food directly to federal workers as a result of the shutdown.

In partnership with the Food Depository, Jewel-Osco provided 500 $25 gift cards for families affected by the federal shutdown. We’re grateful to Jewel and other corporate and foundation partners that stepped up in support of the Food Depository’s response, including Belgravia Group, Chicago Community Trust and Tyson Foods, among others. “It helps us out tremendously. You have individuals who initially had a hard time accepting donations. Now they realize their pride has to be overlooked. It’s also bringing a lot of us together,” said Darrell English, who worked as a Transportation Security Administration officer at Midway International Airport for 14 years. During the shutdown, English was furloughed and, like many of his colleagues, had to make tough decisions on how to pay his bills, as reported by the Chicago Tribune and WBEZ. Before the shutdown was temporarily halted, English said he wasn’t sure how he was going to pay rent. He also applied for federal food assistance through the Supplemental Nutrition Assistance Program (SNAP). Federal workers like English likely will receive back pay now that the shutdown is temporarily ended. But in many cases, the damage has been done and families have fallen deeper into debt. Significant concerns remain about SNAP funding, as well. If SNAP benefits, formerly known as food stamps, are funded through March, those receiving benefits would still be faced with an unusually long time between disbursements. Benefits for February were disbursed on or before January 20; March benefits likely wouldn’t be disbursed until the first week of March, as per usual.

That so-called “SNAP gap” will cause financial strain and increased food insecurity for millions of American families.

More than 4 million low-income households, including 8 million people, could experience a gap between benefits of more than 50 days, according to an analysis by the Center on Budget and Policy Priorities. The Food Depository will remain vigilant in monitoring the situation. But this much is clear: A federal government shutdown hurts working families and our most vulnerable neighbors.  A shutdown increases food insecurity. It throws American lives into disarray. We call on the White House and Senate leaders to do better for the American people and keep the government open for good.