On a recent July afternoon, Sabrina, Jasmine and Abraham burst from their mother’s vehicle and hustled toward the Lunch Bus in the far south suburb of Lansing.

The two older sisters carried most of the food back to their mother’s car. Little Abraham, a 5-year-old in a Batman shirt, did his part, too, by carrying one box. All three wore masks, as heroes often do these days. Since 2010, the Lunch Bus has delivered free summer meals to any child in need along specific routes in the city and suburbs – part of the Food Depository’s summer meal offerings. This summer, in the midst of an ongoing pandemic, the Lunch Bus is serving Chicago’s south and west suburbs, but the operations look a little different. Instead of being required to eat lunch on site, children are given one box with four meals to go. Parents can also pick up the meal boxes for their children. Adjustments to the rules for the federal summer meal program have helped feed families while reducing the risk of COVID-19 spread. Child hunger has soared during the pandemic as families have faced increased economic hardship. To find the nearest summer meal site to you, text FOODIL or COMIDAIL to 877-877. The following photos were taken by Nancy Stone for the Food Depository at the Lunch Bus stops in Lansing and Berwyn. The Ercillo sisters, Ashley, Lauren and Amber, eat lunches they received from the Food Depository’s Lunch Bus in the small park next to the Berwyn Township office. The Lunch Bus parks next to the office three days a week. Summer is always a concerning time for child hunger, as many children don’t have access to free and reduced-priced meals offered at school. “Having these lunches, it’s just one less thing for us to think about,” said Megan Bustamante, who is a mother of three, including two-year-old Esme (pictured). Though her husband continues to work, Bustamante hasn’t been able to return to her part-time job as a church youth director because of the pandemic. This summer, COVID-19 has made the situation even more dire. Nationally, almost 1 in 3 households with children are now reporting food insecurity, according to an analysis by Northwestern University economists. 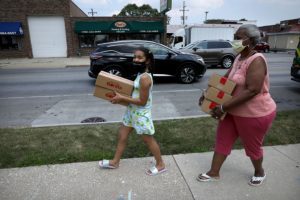 Both nationally and in Illinois, the situation is even more challenging for Black and Latino households with children. The pandemic has laid bare racial disparities, including access to food, that have existed for years. 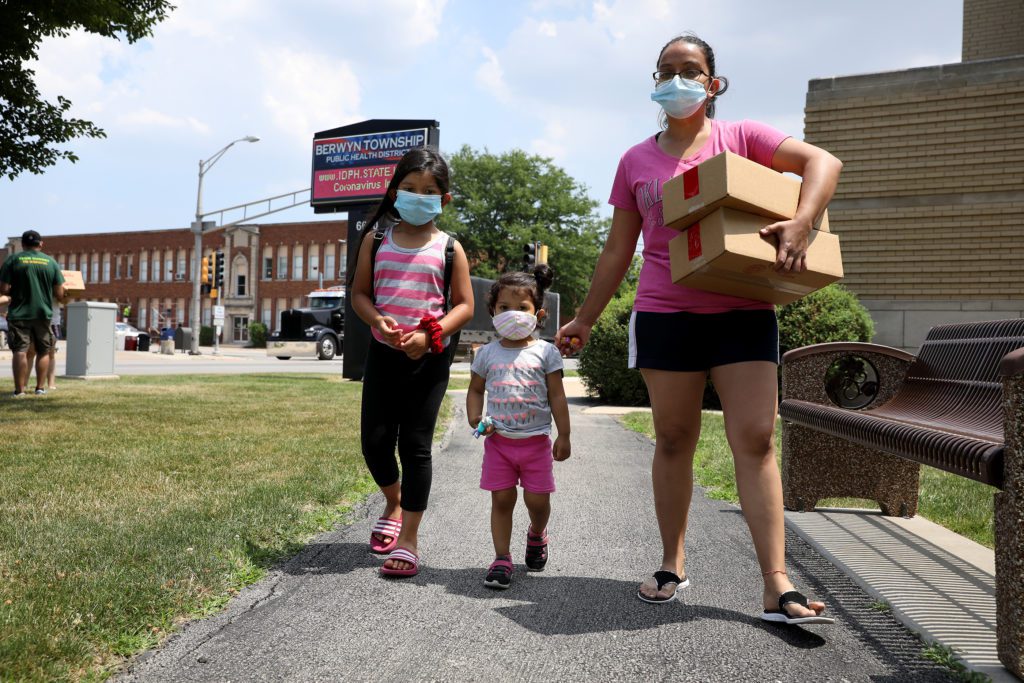 “I feel relief with the program,” said Elizabeth Contreras, pictured with her daughters, 7-year-old Yaretzi and 2-year-old Camila in Berwyn. Due to COVID-19, her husband’s hours have been reduced at his factory job, causing the Cicero family to turn to school meal programs and to the Lunch Bus. A young boy puts boxes of meals in his mother’s car at the Lansing Lunch Bus stop. Three-year-old Lila’s father contracted COVID-19, her grandmother, Maria Moreno (right), said. He’s now recovered and back to work as a union steward. And Moreno’s daughter, Lila’s mother, has been working full-time from home. Together, Lila and her grandmother visited the Berwyn Lunch Bus stop. “It helps her a lot,” Moreno said. “And it helps me, too.” As of July 10, the Lunch Bus program has distributed more than 25,000 meals, a 314% increase from summer 2019 – a spike that reflects both the increased need and the changes in the program rules. This summer, the Lunch Bus stop in south suburban Lansing (pictured here) is one of the Food Depository’s busiest, giving out an average of nearly 130 boxes of meals per distribution. “It’s working out real well, the children like it,” said Harry Carey, a father of three from Lansing, about picking up meals from the Lunch Bus. As a result of COVID-19, he lost work hours. The meals, he said, help put food on the table for his children, ages 15, 8 and 7. A mother and daughter leave Lansing’s Lunch Bus stop, located next to the Lansing Public Library, with several days’ worth of breakfasts and lunches. Jeanette Calderon worked in customer service in the travel industry before the pandemic brought the travel industry to its knees. Now, the mother of three turns to the Lunch Bus for meals for her kids, including 7-year-old Janelle (pictured). She hopes that Congress acts to extend the additional pandemic assistance for those who have been left unemployed. If not, her benefits will be significantly reduced. “We’re hoping for the best, but you never know,” Calderon said. “This definitely helps with breakfasts and lunches for them.”