Since she was 6, Jalissa Bowers has spent countless afterschool hours at the Boys and Girls Club just down the street from where she lives in Humboldt Park on Chicago’s West Side.

It was there that Bowers found friendship, inspiration and something else – her own voice. Once a shy girl, the now-15-year-old exudes confidence and poise. Officially known as the Union League Boys & Girls Club – Miguel Barreto, many of the kids simply call it “The Club.” “I found out who I was here,” said Bowers, who runs the club’s leadership program for teens. When she needed it, Bowers also found food. In partnership with the Greater Chicago Food Depository, the Barreto club serves afterschool meals to about 500 children each weekday during the school year. During the summer, the club serves about 250 kids breakfast and lunch through the Food Depository’s summer meal program. Simply put, the club is nothing short of a haven for the children and their families, many of whom face food insecurity. “I have a lot of friends that I grew up with who don’t have the resources they need, whether it’s food or like someone to tell them they did a good job even,” said Bowers, who also plays volleyball and writes poetry.

“I think what this (meal) program is doing for us is a really big help,” Bowers said.

The child poverty rate in Humboldt Park is 41 percent, which is significantly higher than the 27 percent rate for Chicago and more than double the rate for Cook County, according to community Census data tracked by the Food Depository. Kids raise their hands to answer a staff question at the Barreto club.

“We’ve had kids come in here in a bad mood. Sometimes they can’t even pinpoint what it is. And I see that turnaround after they get some food in their system,” said Rosita Correa, program director at Barreto. The Food Depository is a sponsor of the afterschool meal program, which is federally funded through the Child and Adult Care Food Program (CACFP). Gourmet Gorilla, a local food service company contracted by the Food Depository, prepares and delivers the meals, which are then heated up and served at the club. Friends goof around during the afterschool meal at the Barreto club, which serves about 500 kids each weekday during the school year.

The Barreto club is also one of more than 250 sites expected to participate in the Food Depository’s summer meal program, which is federally funded through the Summer Food Service Program (SFSP). The U.S. Department of Agriculture oversees both federal programs. The club is a closed site for summer meals, which means that it requires registration and a small fee. In contrast, open summer meal sites require no sign-up or fee. (To find an open summer meal site near you, visit summermealsillinois.org.) A girl enjoys an afterschool meal at the club.

On a late Spring afternoon, the Barreto club was buzzing with the frenetic energy of children. In the front room, some kids shot hoops and played table tennis. Upstairs, some teens worked on their homework while others blew off some steam playing video games. Outside the lunch room, groups of boys and girls lined up for the day’s food offering: chicken, green beans, orange slices and milk. 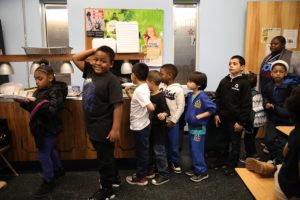 Kids line up for the afterschool meal on a recent Spring day. The Food Depository contracts with the food service company Gourmet Gorilla, which prepares the meals. A girl strikes a pose with a green bean during the afterschool meal. Jayniyah, 9, often participates in art activities and works on her homework at the club. It’s easier to focus when she’s not hungry, she said. “My favorite is the macaroni,” Wyatt said with a grin. Jayniyah, 9, poses for a portrait at the Barreto club in Humboldt Park.

The meal program is also a good opportunity to introduce the kids to fruits and vegetables that they might not have tried before, Correa said. “Maybe they’ve never tried broccoli. They’ve seen it in movies and they’re like, ‘I know that’s gross,’” Correa said. “And I say, ‘Try it, you might actually like it.’” Rosita Correa is program director at the Barreto club.

Beyond its extensive academic and athletic programming, the Barreto club also connects families to food pantries, medical resources, child care and other forms of assistance, Correa said. At the end of the day, though, they can only control what happens inside the club.

“I think sometimes it’s overlooked – the necessity of there being food available to kids,” Correa said. “It’s a domino effect having them be able to pay attention and be fed. It’s one less thing to worry about.”

Jada McGarry, 19, has grown and thrived at the Barreto club. Currently a freshman at Harold Washington College, she hopes to eventually transfer to a university and possibly major in environmental studies. She developed her love of science at Barreto and now helps run the club’s science program. Jada McGarry is a student at Harold Washington College with plans of studying environmental science. She also works at the club.

Outside the walls of the club, McGarry said, the dangers of the streets are real. Inside, the food sustains the children as they chase down their dreams. “When a kid isn’t eating or getting the things they need at home, it could cause emotional problems,” McGarry said. “I think it’s really beneficial to have these food programs in a place where they can relax and be themselves.”