At 94, Near North pantry coordinator still serving others

If the walls of St. Matthew United Methodist Church could talk, they’d probably sound a lot like Corwin Marbly, Sr. unwinding a yarn from his family’s past that’s deeply interwoven with the Civil Rights legacy of the Near North Side church.

Deep, resonant, warm and funny. And if the walls could laugh, they’d no doubt sound like Corwin as he opens his mouth wide and delivers a raspy belly cackle. At 94, Marbly still takes great joy in his life and in his service as one of the most venerable and longest-tenured food pantry coordinators in the Greater Chicago Food Depository’s network of agencies and programs. Though not as spry as he once was, Marbly continues to preside over the longtime pantry’s distribution every Tuesday, as he has for more than 30 years, with the help of his son Arthur. “I learned a lot in my 94 years – that you can’t live in this world by yourself,” Marbly said. “You may have something today and not have anything tomorrow. … But all of us, before we leave this world, we’re going to need someone to do something for us.” Marbly considers his work to be a continuation of the legacy of his father, the Rev. Henry Marbly, a former St. Matthew pastor who helped people in the neighborhood find work. And he has no intention of stopping anytime soon. “There’s nothing to keep me from doing it,” Marbly said. “If I see there’s a need to help people, and I can help them, I’ll help them.” A changing neighborhood In 1938, the Rev. Henry Marbly moved his wife and eight children from St. Paul, Minnesota to Chicago to become the pastor for St. Matthew. In the decades that followed, the Near North Side underwent tremendous change. Once mostly populated by Irish, Italian and Swedish immigrants, the neighborhood increasingly became home to black families moving from the South during what’s commonly known as the Great Migration. Fast forward to today and the Near North neighborhood is now rapidly gentrifying. Once in the shadows of Cabrini-Green, one of Chicago’s most troubled housing projects, St. Matthew is now surrounded by new development, including upscale retailers and luxury apartments. The last Cabrini-Green high-rise building was demolished in 2011. Art Marbly helps his father though the doorway at the St. Matthew Child Advocate food pantry.

Census data appears to paint a picture of urban renewal in the Near North Side community. The number of people in the community living below 185 percent of the federal poverty line, a common threshold for some social services, has declined in recent years, according to American Community Survey data tracked by the Food Depository. Since Cabrini-Green was shut down, there’s also been a decline in the number of people walking into the St. Matthew Child Advocate food pantry, Marbly said. As it has since formally opening in 1973, the food pantry continues to serve the neighborhood’s most vulnerable residents. For most of the pantry’s lifespan, Marbly has been at the forefront of the church’s efforts to help people living in poverty, bringing order and compassion into their lives. In 2005, Marbly was honored as a recipient of a Jefferson Award, a national recognition for public service. He and his wife Garnett traveled to Washington, D.C. for the award ceremony – a giddy once-in-a-lifetime experience for them both. “He’s the male version of Mother Theresa,” said the Rev. Rodney Walker, pastor at St. Matthew. “His presence is living testimony to how to live out the Gospel message of peace.” On Marbly’s continued service at his advanced age, Walker said: “It makes him come alive. It keeps him alive.” A father’s legacy When Corwin was a boy, his family lived in a house next door to the church. At times, he recalled, Rev. Marbly and his wife, Mayme, would be sitting down to dinner with their eight children, when someone would knock upon their door. Despite his own meager salary and large family, the pastor would invite them in to eat. “He’d have us slide down and make room for you,” Marbly said. “This is the kind of thing that I grew up with.” Many black people who migrated up from the South had baptismal records but not birth certificates – an obstacle to employment, Marbly said. But the Rev. Marbly, who served as St. Matthew pastor from 1938 to 1948, was a notary public and was able to authenticate their records. He helped many of them find employment at the former Oscar Mayer plant nearby, where he had connections. The Rev. Henry Marbly and his wife, Mayme, in an a family photo from the early 1960s.

Rev. Marbly also started the church’s first food assistance program in 1938 when he organized bushel baskets of food for families in need during Thanksgiving and Christmas. He wanted his son, Corwin, to become a minister, but that wasn’t meant to be. Corwin was drafted to the military in 1943 and served in the U.S. Navy at the tail end of World War II. He later worked for the U.S. Postal Service for 35 years before retiring in 1985, rising through the ranks to a leadership position at a regional facility. Marbly and his wife, Garnett, had five boys – Charles, Thomas, Nathan, Corwin, Jr., and Arthur. 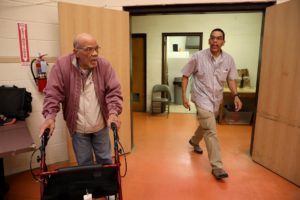 Corwin and Art prepare for a recent distribution at the St. Matthew food pantry.

Corwin has done nearly everything at St. Matthew except pastor. A longtime trustee, he’s served on various committees. He’s led youth groups, painted the walls and mowed the grass. And since retiring in 1985, he’s run the food pantry with the assistance of a team of dedicated volunteers. His wife, Garnett, was also heavily involved in the pantry until she died in 2006. “I’ve served two generations of kids who grew up,” Marbly said. “Some of the girls wound up being mothers before their time. And they needed help. … And a lot of people have been blessed by this church being here.” Heart in the right place On a recent early fall morning, Devin Green visited the St. Matthew pantry for the first time with her smiling, babbling 18-month-old son, Josiah. When it was her turn, the Lincoln Park resident placed her bags of food in the pockets of his stroller. Green, 33, recently started visiting local pantries after hours were cut at her retail job. “It’s been a little challenging, just balancing bills and buying stuff for him and food and that stuff,” Green said. She’s considering getting a second part-time job, though that won’t be easy as the primary caregiver for young Josiah. In the meantime, Green said, it’s comforting to know that the volunteers at St. Matthew care enough to help. Josiah, an 18-month-old boy, smiles as his mother stocks up on needed items at the St. Matthew food pantry.

“It’s nice to know there’s an option that if we do need some extra help this week or this month, there’s somewhere not too far you can go, receive some assistance and not be ashamed,” Green said. During the distribution, Corwin Marbly sat on his walker and watched over the operation, occasionally giving instructions or greeting people as they walked by. His son Arthur and other volunteers bustled about, packing the food bags and helping the clients. “I know I’m not too much help because I have arthritis now and some days it’s pretty hard getting out of bed,” Marbly said. “So long as I’m able to move around, I intend to do what I can to help the people here. I may get on their nerves, I may be a pest as far as some of them are concerned, but my heart is in the right place.” Art Marbley, Corwin’s son, marvels at the many chapters of his father’s life. “I’m inspired by his longevity and his consistency. He’ll leave things better than when he found them,” Art said. “He’s extraordinary.” In an interview the previous day, the elder Marbly sat in a room beside the church sanctuary where black-and-white photos of his family hang upon the walls, telling stories of generations gone by. Sunlight reflected off his glasses as he gazed out the window and tried to put to words what it’s all meant to him. “I get a personal good feeling in my gut that I’ve done something,” he said. “What you do, you may not always see. You’re being thanked in so many ways.”