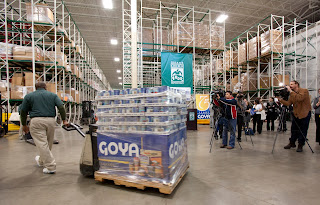 So far the decreases have been off-set by food from the federal government, but federal food may not be as steady a source for much longer. That’s why Goya Foods’ donation of 75,000 pounds of food on Wednesday was so important. Because of Goya, the Food Depository received two truckloads laden with long grain rice, pink beans, red beans, chick peas, black beans and pinto beans–all high-quality, nutritious, low-sodium products. In coming days and weeks, the food will be distributed to our network of 650 pantries, soup kitchens and shelters and provided to people in need across Cook County.

Thank you to Goya Foods for its generous donation in honor of its 75th anniversary–donations that totaled 1 million pounds nationwide on Wednesday. And thank you to United Way of Metropolitan Chicago for helping to make it happen. Food donations are an outstanding anniversary gift for Cook County’s hunger-relief programs. Photo by Charlie Westerman.