At Chicago Standdown, veterans share their struggles, receive help and a hot meal James Aaron is a veteran of the U.S. Army. At the Chicago Standdown, he received a hot meal and help applying for SNAP benefits.

James Aaron contemplated the ups and downs of his recent years as he finished his lunch at the Chicago Standdown at the National Guard armory in Humboldt Park.

In 2011, the Army veteran had a stroke. The very next year, he suffered a heart attack.

But he had only kind words to say about the people and agencies that have helped him recover and reorient his life. Now in his own subsidized apartment in the Woodlawn neighborhood on Chicago’s South Side, Aaron hopes to keep finding ways to “pay it forward” for other veterans who may need help.

And he always looks forward to the Chicago Standdown.

“I love the friendliness and caring of the people here to help us. And I enjoy the camaraderie of the veterans,” said Aaron, 63, who served in the Army from 1975 to 1988.

Aaron was among the hundreds of military veterans to attend the semi-annual Standdown on November 16, an event that connects veterans to clothing, housing, healthcare and public benefits. In fact, before he sat down to eat the lunch prepared by Chicago’s Community Kitchens – a culinary job training program of the Greater Chicago Food Depository – Aaron applied for benefits from the federal Supplemental Nutrition Assistance Program, or SNAP, through the Food Depository’s benefits outreach workers.

“I love the friendliness and caring of the people here to help us. And I enjoy the camaraderie of the veterans,” said James Aaron.

Beyond preparing the hot lunch and connecting veterans to SNAP and Medicaid, Food Depository staff and volunteers also handed out bags of canned goods – peaches, tuna fish, corn, soup and more – along with military issue P-38 can openers.

In military terms, to stand down is a respite or a rest, said Emily Daniels, manager of veteran and health programs for the Food Depository. The Chicago event, which started in 1993, now draws between about 550 and 700 “housing vulnerable” veterans.

The need among veterans is persistent

The numbers paint a picture of persistent need for food assistance among veterans. About 18 percent of households that receive services from the Food Depository and its partner agencies have at least one person who is a veteran or active duty service member.

Pat Orr knows some of the veterans’ challenges firsthand. After serving seven years in the Air Force, Orr said he had to work with a nonprofit lawyer to make sure he received the benefits he was entitled to. Others aren’t so fortunate, said Orr, 30.

Orr, who is now an older adult program specialist for the Food Depository, said there’s also the considerable challenge of finding work after serving in the military.

“Realistically, a lot of guys were putting together bombs, loading bullets or doing security patrols – skills that don’t translate outside of the military. And so they leave after being trained for 10 years for the military and have no real transferrable job skills,” Orr said. 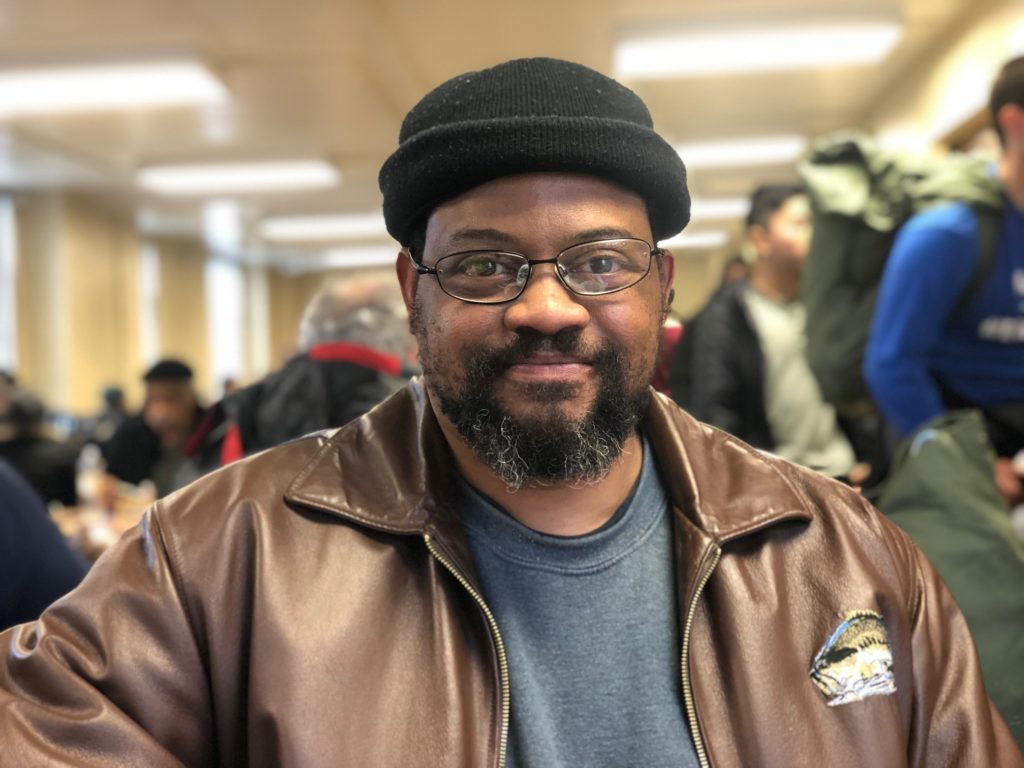 Ranqist Spotts served in the US Army. He struggled to transfer his skills to civilian life: “I feel like I am lost by a generational gap of technology and education.”

Ranqist Spotts served in the Army from 1989 to 2001 helping dispose of bombs. When he left the service, he was unsure of what to do.

“I am still figuring out where I fit in,” said Spotts, 47. “I feel like I am lost by a generational gap of technology and education.”

Since Spotts left the military, he has worked at fast food restaurants and as a janitor, living in subsidized housing. Like others at the Standdown, Spotts said he appreciated the help from the various agencies and enjoyed the feeling of camaraderie among his fellow veterans. Ron Bellamy served in Vietnam. He appreciates the opportunity to connect with fellow veterans at Standdown events.

Ron Bellamy, a 69-year-old Vietnam War veteran, was 18 when he enlisted in the Army. After leaving Vietnam in 1969, Bellamy said he dove into his education, earning an associate, a bachelor’s and two master’s degrees.

Learn more about the Food Depository’s programs for veterans.