“You never think you will be here.” 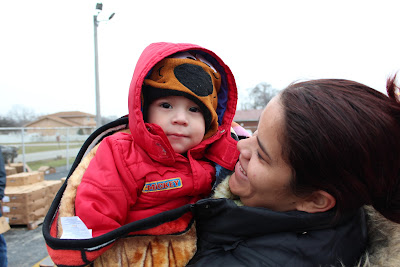 “You never think you will be here until you are here,” said Graciela Cruz, as she stood in line at the True Vine Missionary Baptist Church in Dixmoor. Despite the bitter cold weather, the young mother from Blue Island arrived early with her 18-month-old son Stephen to get in line with more than 180 others for the Greater Chicago Food Depository’s Producemobile distribution on Dec. 18.

The need across Cook County remains at record levels as Food Depository member agencies are seeing more individuals than ever before – with some pantries serving twice the amount of clients they served a few years ago. Newly released data shows pantries recorded 1.95 million visits from July to October this year, a new organizational record for that period. Overall the Food Depository has seen an 89 percent increase in the number of pantry visits in five years.

The record comes as the Food Depository, and food banks nationwide, face increasing challenges in food sourcing due to rising food prices, fewer food donations and limited government food – making every donation to the Food Depository even more critical.

Thanks to the generosity of Food Depository donors and volunteers, Graciela and her son went home with a box of fresh produce, a box of nonperishable food items and a frozen turkey. “It has been a tough couple of months but it is great to know we have help. Thank you for helping my family,” said Graciela.

No one should go hungry this holiday season. Every contribution to the Food Depository puts food on the table for individuals and families in our community.