What $36 can buy: SNAP families face a lot less food 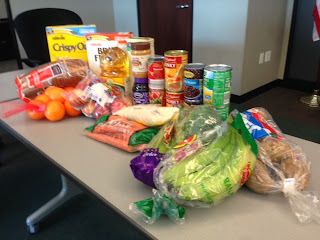 Twelve days ago, families who receive SNAP–in Illinois Link–started the month with less money for food than the previous month. For a family of four, that meant $36 less to spend in November than in October. A part of the American Recovery and Reinvestment Act that had increased food stamp benefits in 2009 expired as of Nov. 1. For families with limited incomes, $36 is a lot of money. I decided to go shopping for $36 worth of food to see firsthand the impact of the ARRA rollback.

For starters, I chose to go to a discount grocery store, where frugal SNAP shoppers likely would use their benefits. I paid 25 cents to use a cart–25 cents that would return to me upon return of the cart. I wheeled the cart in and began thinking about what I would buy for my family on a weekly trip. I started with a bag of oranges for $3.99 and moved down the aisle to an area with peanut butter and jelly. Next was produce, and I loaded my cart with bananas (a bunch for 54 cents!), broccoli, carrots and celery. These would go well with a number of meals, as I had plans to buy rice and pasta as well. I selected quite a few canned goods, including black beans which were just 59 cents each. Often, low-income families rely on canned protein products in lieu of more expensive fresh cuts of meat. I chose two cans of chicken soup, knowing that people who work multiple jobs–like many SNAP users–might not have time to make fresh soups from stock. I was able to get a 5-pound bag of potatoes for $2.49–potatoes, though high in carbs, are a versatile food and would last a while.

When I got to the register, I paid for four bags, thinking that I could fit all the food in two bags (double-bagged). My total was $35.89, and the two bags ended up nearly bursting at the seams. The conclusion: a $36 cut is a major cut. The amount of food I bought (pictured above) is quite a lot of food. People have asked us ‘have you seen an impact yet?’ The truth is we won’t see an impact until the end of this month, when those SNAP dollars are dwindling faster than the month before. Then it’s likely we’ll see longer pantry lines.

As if a coda to the whole experience, a man approached me in the parking lot as I turned my cart toward the front of the store. I thought he was an employee and then realized that he was waiting in hopes of getting my 25 cent deposit. I gave him the cart, and he smiled his appreciation as he headed to get the refund–and likely, some food.