“This helps me pay for food.” 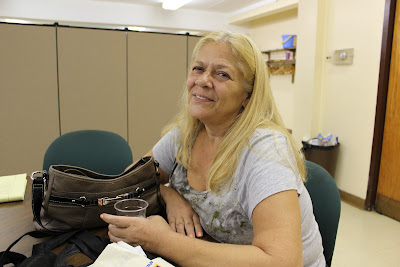 Carole Lorden, of Chicago Ridge, was living the American dream until a few years ago.

“I had a great paying job, saved up and bought a beautiful home. My life was on track,” said the 56-year-old former office manager.   “I would read stories about people losing their jobs and struggling and think ‘I am glad that’s not me.’ Then the bottom fell out and now here I am at a food pantry.  Now I am the one struggling.”

Carole’s 20-year career as an office manager was cut short when she became very sick. Unable to work, she was forced to go on permanent disability and quickly went through her savings paying for medical bills and her mortgage.  Now at the end of each month she said there is not enough money for food.  She relies on the UMC Worth food pantry, a Greater Chicago Food Depository partner agency, and SNAP (Supplemental Nutrition Assistance Program, formerly known as Food Stamps) to put food on the table.

“It has been a godsend,” said Carole, about receiving her monthly SNAP benefits.  “I don’t want to lose my home. It’s the only thing I have left. So this helps me pay for food so I can pay my mortgage.”

That could soon change for Carole and many other SNAP participants like her. Lawmakers are considering up to $16 billion in cuts to SNAP in the Farm Bill – the single largest source of federal funding for nutrition assistance programs – potentially limiting or eliminating access to food for thousands of Cook County households.

The proposed cuts to the Farm Bill would terminate SNAP eligibility to several million people nationwide by eliminating categorical eligibility. Categorical eligibility allows states – including Illinois – to increase or eliminate the federal asset test, which can prevent otherwise eligible low-income households from receiving SNAP benefits all because they own a modest car or a home.

Eliminating categorical eligibility could potentially remove two to three million individuals from SNAP benefits. For Carole and many of the more 820,000 SNAP participants living in Cook County, these cuts could mean the difference between putting food on the table and going hungry.

Congress has postponed passing a Farm Bill until after the November elections, meaning there is still time to take action and protect the nutrition safety net. Contact your representative and urge them to pass a Farm Bill that protects and strengthens food assistance programs like SNAP. For more tools and information visit the Food Depository’s Advocacy Center at chicagosfoodbank.org/advocate.