With seemingly boundless energy, she briskly moves from room to room at the Hattie B. Williams food pantry in south suburban Oak Forest – restocking fresh groceries, sharing laughs with fellow volunteers and offering comforting words and hugs to visitors. Annie Hill, coordinator of the Hattie B. Williams food pantry, restocking fresh produce. She assumed the leadership role after her sister Hattie, who founded the pantry, died in 2014.

But when she talks about her sister, Hill slows down. Her face lights up. Her voice softens. “She just had that gift for feeding people,” Hill said. Hattie Williams wasn’t only Hill’s older sister, but also her close friend, always willing to offer a sympathetic ear and helping hand to whoever needed it. Mostly though, Hattie was known for showing her compassion through food. On Sunday evenings,  Williams often cooked dinner not only for her family, but also their entire church choir, her sister recalled. She used whatever she had to feed the crowd of nearly 20. In 1992, Williams and her husband Wesley founded the Valley Kingdom Ministries International church’s food pantry after noticing community members turning to the church in suburban South Holland for food assistance. Williams died in 2014 at age 67, but her sister continues her legacy at the pantry now named in her honor. The Hattie B. Williams food pantry, which has since moved to Oak Forest, serves between 60 and 100 households during its weekly distributions and is one of the Greater Chicago Food Depository’s community partners. Hattie B Williams (pictured) founded the Valley Kingdom Ministries International church’s food pantry in 1992. After she died in 2014, the pantry was named in her honor. (photo courtesy Annie Hill)

Hill, 62, wants the pantry to be a “beacon of light,” offering food, clothes, and other support services to their neighbors across the South Suburbs. “People have to eat,” said Hill, who is now the pantry coordinator. “I don’t care what color you are, I don’t care what your background is. Food is something that brings us together. It’s a comfort…We just want to make sure people are eating.” During the pantry’s final distribution before Christmas, guests walked through the series of rooms that stretched down a long hallway in the church facility. Many started by choosing items on a free clothing rack before making their selections from an array of fresh produce. After that, they entered a separate room where volunteers offered canned goods, milk and eggs. Many of the racially diverse clientele who turn to the pantry are working families struggling to make ends meet and older adults living on a fixed income, Hill said. “I’m here because we really need the help,” said Maria Ruiz of Posen. The 48-year-old mother of four has been unable to work because of a work-related injury. In September, she slipped on a puddle of floral water in the supermarket where she works as a cashier and tore three tendons in her leg. Maria Ruiz and her four-year-old daughter, Emely, at the Hattie B. Williams food pantry.

Her worker’s compensation did not cover the full cost of missing work for an extended period, and her husband’s income typically comes from seasonal jobs in the summer, such as air conditioning installation. “It’s been very hard, especially with the holidays,” Ruiz added. Hill and her volunteers work to build trust and combat people’s fear of judgement by creating a family-like atmosphere. “The kindness that Hattie had shown to people, is what we try to carry on,” she said. “That same kindness, that same love for people, that same compassion… there’s always opportunity to be nice.”

Offering ‘a hand up’

When Antoinette Dykas first visited the pantry a few months ago, she wept. She was overwhelmed by the generosity, and the food offered her a “sigh of relief” during a time of financial struggle. “There was hope,” she remembered thinking during that first visit. “A hand up. Just to help you through these hard times, it can make a world of a difference.” Dykas, 57, works as a bartender and waitress. She lives with her long-term boyfriend, whose job as a brick layer is mostly seasonal. To manage bills and have enough food for them and his two kids, she’s turned to the pantry. Whatever leftover food they have, Dykas said, she shares with others in need like her parents or neighbors. Antoinette Dykas receives food to support herself and her family during a recent distribution at the Hattie B. Williams food pantry.

Before Dykas walked out the door with her cart of groceries during a recent distribution, she turned around and addressed the crowd of workers. “Thank you very much!” she projected so everyone could hear. “I appreciate every single one of you guys so much volunteering, making sure there’s food for people like me, making life a little bit easier.”

Before becoming the coordinator, Hill volunteered at the pantry after retiring from an insurance company in 2010. Around that time, she drove her sister to pantry coordinator classes at the Food Depository. It was experience that unexpectedly came in handy later on when she was asked to take over. “I had no idea God had given me the same passion for feeding people that he had given her,” Hill said. Since her sister died, Hill has grown the roster of food pantry volunteers – from about three to four regular volunteers to now having close to 25. Many of them knew Hattie, Hill said, and were inspired to get involved. Volunteer Canise Irons works hard for someone who’s technically retired, but that’s how she prefers to be. Last November, she retired from her managerial position at the Franciscan Health Olympia Fields hospital. And at 66, she shows no signs of slowing down. “This was a perfect fit for me,” Irons said. “This pantry has been a blessing to the community. I know people are very appreciative.” Volunteer Canise Irons, who retired last year, helps out at the Hattie B. Williams food pantry in Oak Forest

A few years ago, the pantry fulfilled some of Hattie’s goals of offering Supplemental Nutrition Assistance Program (SNAP) outreach and participating in the Food Rescue program in partnership with local grocery stores. But when the church sold its South Holland facility in 2017, and the pantry had to move to the south suburb of Oak Forest, it took a while to engage with their new community, Hill said. Through outreach with elected officials and at local schools, and through word of mouth referrals, they are now serving around the same number of people prior to the move. “It has built back up,” said Hill.

Next, Hill envisions transforming the pantry’s setup to more resemble a grocery store. Guests could walk through aisles and make their selections from shelves stocked with food. To do that, the pantry will need to find another building with more space. Hill hopes to apply for grants and forge relationships with city officials to secure a new space by next year. 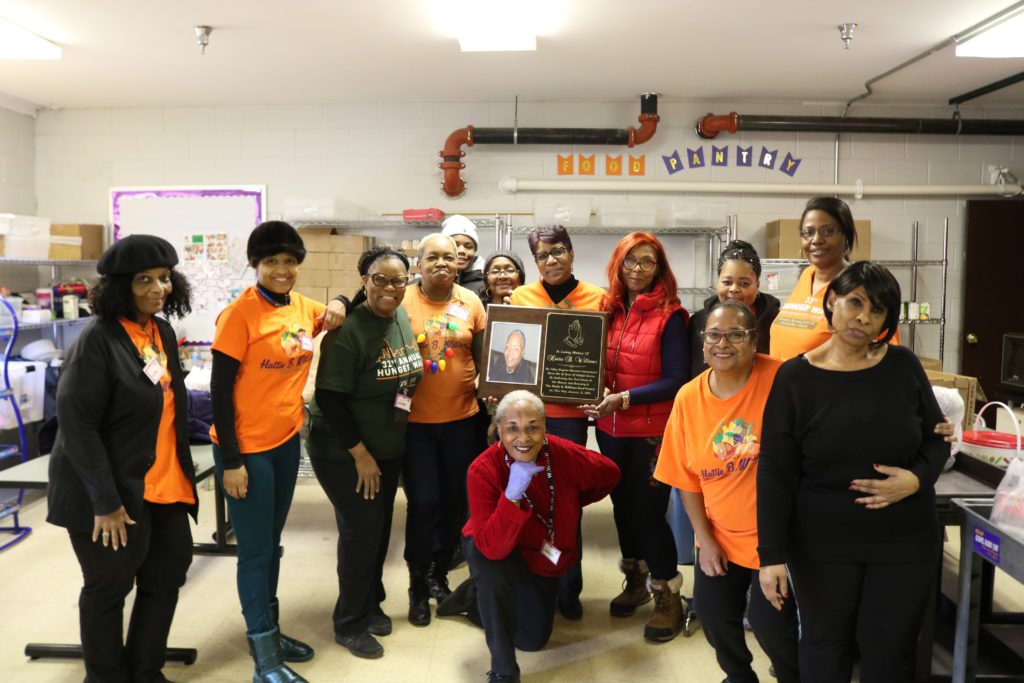 The volunteers of the Hattie B. Williams food pantry pose with a plaque made in Williams’ honor.

When asked what she thinks Hattie would say if she was around today to see the strides the pantry has made, Hill said that is something she thinks about all the time. And Hill’s answer is simple: “She would probably be just amazed.”