South Side agency works to nourish the whole family 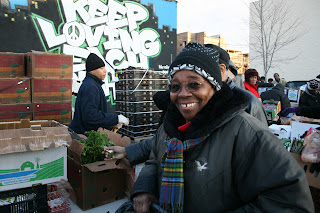 Delorise Chambers shops for fresh pineapples at the monthly Greater Chicago Food Depository
Mobile Pantry distribution at K.L.E.O Community Family Life Center on Dec. 7.
South Side K.L.E.O Community Family Life Center opened its Kids Cafe program in 2008. In partnership with the Greater Chicago Food Depository, the community center provides hot meals and after-school programming to more than 70 elementary school children each weekday.
“A lot of kids were trying to take food home,” said Torrey Barrett, executive director of K.L.E.O. “We figured out that they were taking it home [because] the parents weren’t eating. We reached out to the Food Depository to ask if there was a way to start serving the parents of the children we are serving.”
The Food Depository suggested adding K.L.E.O. to its Mobile Pantry route. In March 2010, the Mobile Pantry began delivering a truck load of fresh fruit, vegetables and nonperishable food once a month. As word spread about the new program, the distribution soon grew to serve nearly 200 people each month. Clients began asking Torrey and his staff for help with other obstacles they were facing, besides food.
“We were having a couple hundred people come here every first Wednesday, but we didn’t have anything for them to do as we were preparing the food,” Torrey said. K.L.E.O. reached out to University of Chicago for help. The university’s Diabetes Outcome Research Program began attending distributions to offer health education, free blood pressure readings and other resources to help those struggling with diabetes and other health concerns.
During a frigid December afternoon, dozens of volunteers work to prepare tables of food for the afternoon’s distribution.
“I like what they’re doing out here,” said first-time volunteer Rose Rice as she packs bags of sweet potatoes for clients coming through the line. “It’s just a good thing.”
Hurlon Jackson is visiting the Mobile Pantry after hearing about it last month.
“I’m grateful for this,” Hurlon said. “[The Mobile Pantry] helps tremendously, especially in this area where they don’t have a lot of stores. The smaller neighborhood stores are more expensive and don’t have the fresh produce.”
For Delorise Chambers, the Mobile Pantry keeps her family from going hungry.
“This is a blessing,” said Delorise. “If [the Mobile Pantry] wasn’t available we would just be short. Some days we wouldn’t eat because there’s no money.”
Although Delorise retired in 1994, her two daughters try to help with bills and house payments, but lately it is just not enough. The family has fallen behind on their housing costs as both daughters struggle to find employment.
Green McClelellan also is dealing with unemployment. After 15 years at a global mailing company, Green lost his job three months ago during a staff reconfiguration.
“This is my first time here,” said Green. “There’s no food at my house right now. We’re doing the best we can.”
Share Story