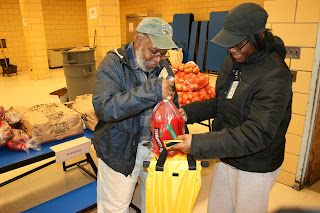 Five years after the beginning of the economic downturn, hunger in Cook County continues to affect hundreds of thousands of people. New data from the Greater Chicago Food Depository is highlighting the extent of that need in our community.
“What concerns me is against a backdrop of economic optimism, we continue to see a very different story as it relates to the people who are turning to food pantries and soup kitchens,” said Greater Chicago Food Depository Executive Director and CEO Kate Maehr.
According to recent Food Depository year-to-date data, there has been a staggering 78 percent increase in individuals served at pantries compared to the same period five years ago.
“We continue to see a record number of people in our community who need food from food pantries in order to make ends meet. As we begin to think about what it looks like in the long term, it becomes increasingly clear that this new normal is one that we’re going to be seeing for a long time,” Kate said.
Further, in March 2013 there were 411,311 individuals served at pantries and 130,742 household visits to pantries in Cook County.
“It’s going to take continued, sustained efforts to make sure we have quality, nutritious food available and it firms our resolve to be even more aggressive in thinking about how to shorten those lines through our advocacy and programmatic efforts,” Kate said.
The pace of pantry visits has also increased compared to last year. If the first half of FY 2013 is repeated, there will be 308,217 more individual visits compared to last year.
And that’s not a new trend.
Every month in FY 2012 except September saw an increase in the number of individual visits to food pantries. There were 297,742 more visits last year compared to 2011, which averages to 24,812 additional visits per month.
Lillie Dawson sees the growing need every week. She’s the soup kitchen and food pantry program coordinator at Grant Memorial A.M.E Church in Oakland, which has been distributing food from the Food Depository for 30 years.
“Every year there are more and more people. Without the Food Depository, we wouldn’t be able to do what we’ve done for so long,” she said.
There are more than 807,000 men, women and children in Cook County who are food insecure – meaning they’re not sure where their next meal will come from. To learn all the ways you can join the fight against hunger in our community, visit chicagosfoodbank.org.