Lobbying for hunger relief in Illinois: Day Two at the Feeding Illinois Conference and Lobby Day in Springfield 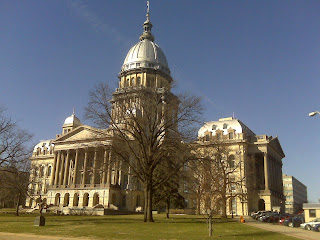 Everyone was up bright and early the next morning, excited to meet with legislators and tell the stories of their communities. Participants met in smaller, two- to five-person groups by the legislative district in which their program is located. Groups reviewed their meeting schedule and talking points over breakfast.

In light of the budget crisis in Illinois, lobbyists aimed to raise awareness about legislation that would benefit Illinois’ hungry families without any added financial burden to the state, such as inviting legislators to join the Anti-Hunger Caucus and support a bill that would help divert more eggs—a nutrient rich, but rarely donated, item—to Illinois food banks.

I asked Oak Park River Forest Food Pantry, a member of the Food Depository, if I could tag along with their group for their first meeting of the day with their representative, Sen. Don Harmon (D-Oak Park).

As I sat down with the group, pantry executive director Kathy Russell continued down the list of meetings planned for the day. Kathy and her team had done their homework on each and knew what West Side neighborhoods they represented and how many clients the pantry served from each area. When asked if they had any specific stories from their pantry to share with legislators who had not seen the pantry in action, Michele Zurakowski nodded.

“We stayed open the night of the blizzard,” said Michele, director of operations at the pantry. “We served 15 families that night, including a working mother of five. She was stressed out that schools would be closed for the next two days and her children wouldn’t be able to get school lunches so she had to come up with enough food for 30 meals. It was one of those times where you realize this is why we are here.”

“If people are coming to pantry in a blizzard, they really need the help,” Kathy added.