•
Uncategorized
•
By orbiteers
Nearly 30 representatives from the Greater Chicago Food Depository and member agencies are joining more than 900 other anti-hunger advocates in Washington, D.C. Sunday through Tuesday for the National Anti-Hunger Policy Conference. The attendees will be learning advocacy best practices during the conference, which will culminate in visits with Cook County lawmakers on Capitol Hill on Tuesday.

The Food Depository will be live-blogging here throughout the conference, providing insight from the GCFD participants, photos and other information. Be sure to check back often as we raise our voice to let Washington, D.C. know that No 1 Should Go Hungry!
Monday, March 3


9:45 p.m. Ultimately, fighting hunger is about making sure people in our community have enough food to feed their family. It’s about making sure a family can come together and share a meal, which is exactly what Food Depository advocates did tonight.

Amidst a family-style Italian dinner, the advocates shared their impressions of the conference: “Inspiring,” “eye-opening,” “a wealth of information,” were just some of the ways the past two days were described.

As the group looked back, there is much still to look towards. Tuesday brings visits to 11 different lawmakers or their staffs on Capitol Hill, to discuss the need in Cook County. Food Depository executive director and CEO Kate Maehr summed up the spirit of the visits when she addressed the advocates at dinner, quoting the saying, “Nothing about us without us.”

In order to raise our voices so that lawmakers know there are 860,670 men, women and children in our community who are hungry, we must actively educate them. And, armed with personal experiences, skills learned at the conference, and a passion for fighting hunger, nearly 30 Food Depository advocates will take to the Hill on Tuesday, to tell lawmakers that No 1 Should Go Hungry. 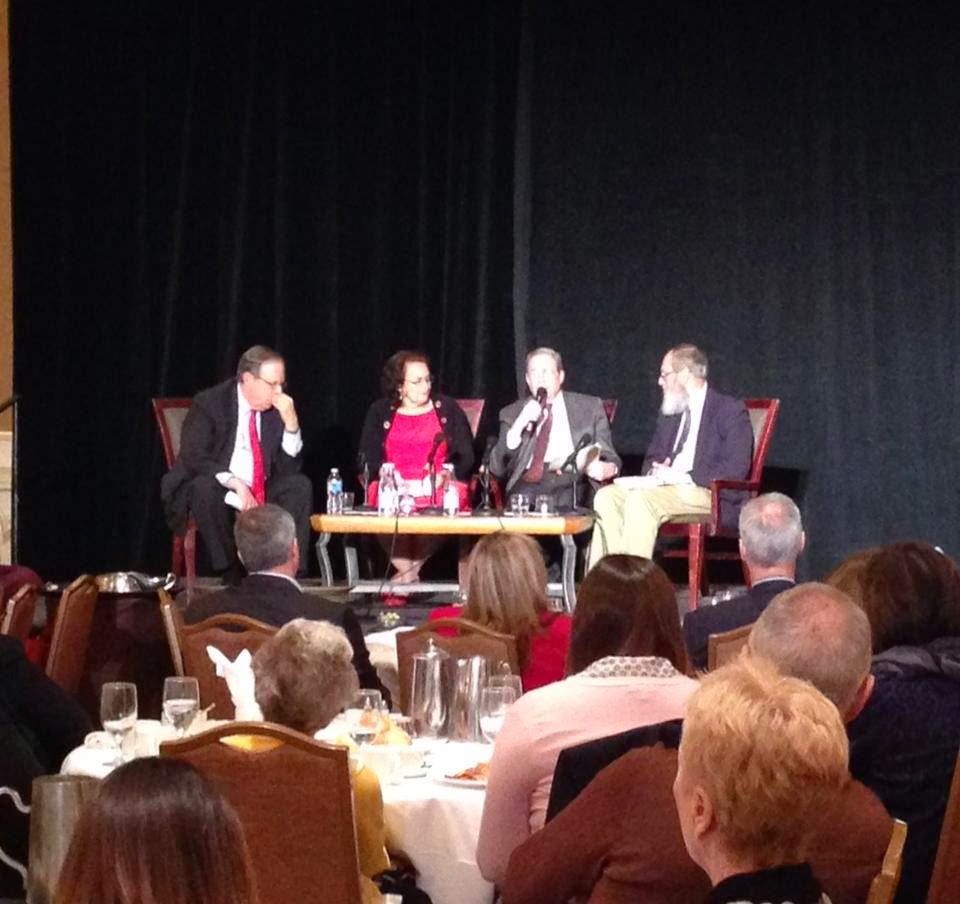 3:07 p.m. Conference attendees were treated to a fantastic panel session at lunch, moderated by Pulitzer Prize winning author David Shipler, who wrote “The Working Poor: Invisible in America.” The panel included Peter Edelman, a law professor at Georgetown University, Sylvia Drew Ivie, of the LA County Board of Supervisors, and Jim Weill, from the Food Research and Action Center.
Panelists discussed what has worked in the War on Poverty, what hasn’t and what the nation needs to do moving forward to address hunger. Discussing what has worked, Edelman referred to the Supplemental Poverty Measure, which takes into account the effect of government benefits on poverty.
“We should be very proud of our accomplishments in the War on Poverty,” he said. “We would have twice as many people in poverty today if we didn’t have government programs.”
According to a report from Columbia University, when tracking poverty using the Supplemental Poverty Measure, poverty in 1967 was at 26 percent, compared to 16 percent in 2012.
In terms of what hasn’t worked, Sylvia Drew Ivie said an increase in the minimum wage is needed. Edelman suggested there needs to be work done on the policy side, but that is difficult given a “damaged economy.”
Wrapping up the discussion, Shipler summed up the issue: “Poverty, in the end, can be seen as an issue about children. They’re innocent in this,” he said. The long-term effects of poverty are devastating for a child’s life.”
Stay tuned for more from the conference and from our visits to Capitol Hill tomorrow. Also, check out the second part of our “Why I Advocate” series, featuring Sarah Greenberg from EZRA Multi-Service Center.

One of the most important parts of a Congressional visit is presenting your story to the staffer or legislator. A well-told narrative can make an incredible impact and can influence votes, so how an advocate tells his or her story to the lawmaker is critical. And, GCFD advocates seem ready to tackle the challenge.

“I’ve got three stories ready that I typed out,” said David Tatum, from Firman Community Services.

Some are planning to tell stories based on their own experiences.

“I’m going to tell the lawmakers about my own struggle with hunger,” said Ulondia Johnson, Assistant Lead Teacher at the Golden Gate Daycare Center. “I have known hunger in my life and so have my children and I want to tell that story.”

Also this morning, the Dick Goebel Public Service Award will be announced, which honors an individual that exemplifies public service to their community and is a tireless advocate on behalf of hungry people. Food Depository executive director and CEO Kate Maehr received the award at last year’s conference.

Sunday, March 2
9:09 p.m. What a day! The first day of the conference wrapped up with sessions on messaging and how to best tell your story to lawmakers by honing an effective, efficient, moving narrative.

As rain changes to snow tonight and Washington braces for a taste of Chicago winter (6-10 inches of snow, on top of a sheet of ice) that threatens to shut down the city, the conference will go on! Tomorrow, advocates will meet over breakfast to finalize plans for visits to Capitol Hill. We’ll also hear from AARP Foundation President Lisa Ryerson at lunch.

Make sure to come back for more updates tomorrow! In the meantime, check out the first in our “Why I Advocate” series, as three advocates from GCFD member agencies write about what motivates them.

1:20 p.m. Through the first full sessions of the conference, the Food Depository group is already gaining insight. Ulondia Johnson, from the Golden Gate Day Care Center, went to a session on how the Farm Bill has affected SNAP.

“I wanted to learn more about SNAP so I can better educate my clients when they have questions at the daycare,” she said.

Insight has been an early theme to the conference and so has inspiration.
The latter was most clear at the lunch plenary session. To see an enormous room full of men and women passionately dedicated to ending hunger is an incredible sight.

“It’s inspiring,” said Elise Cody, from Benton House. “You can really feel the energy of everyone building coalition together.”

Feeding America President and CEO Bob Aiken spoke first at lunch. He highlighted the work that advocates did on the Farm Bill.

“The advocacy that we do is absolutely essential to ending hunger,” he said. “Without our tireless advocates, I think the results (of the Farm Bill) would have been far worse.”

“We can end hunger and poverty,” she said, to much applause.

7:40 a.m. Welcome to Washington, D.C.! The Food Depository contingent arrived safely yesterday and is ready to be fully immersed in advocacy for the next few days.
“It’s going to be a learning experience,” said Pamela Powell, of the Christian Life Center in Berwyn.
The conference gets underway this morning with sessions discussing the causes of food insecurity, SNAP outreach, social media and more. We’ll also hear from Feeding America President and CEO Bob Aiken at lunch.