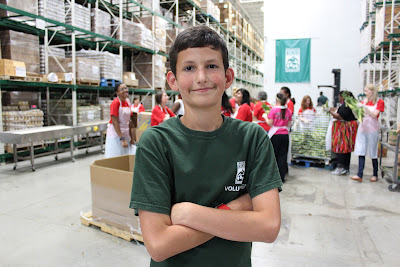 Meet Getty.  For the past seven years, Getty has been giving time and donating money to the Greater Chicago Food Depository.  A long time for someone who is only 13 years old.

For years, Getty and his family have attended Kids Days and volunteer sessions – sorting produce, repackaging pasta and even doing some office work around the Food Depository.  However, donating his time was not enough for the young volunteer.  At the age of 7, Getty and his younger sister set out to raise funds for the Food Depository with a time honored classic: a lemonade stand.

With a little help from his parents, Getty set up a small, white table on the street outside his building and sold lemonade and cookies to passersby. He admits business was a little slow at first- only collecting $45 his first year – however once the word got out the funds started pouring in. Since 2006, Getty has raised more than $1,400 for the Food Depository.  That’s a lot of lemonade!

When asked why he works so hard in the fight against hunger, Getty said helping people in his community makes him feel like he is doing his part.

Kids can make a difference too!  The Greater Chicago Food Depository has volunteer opportunities for people of all ages. Contact Volunteer Services at 773-247-4232 or visit chicagosfoodbank.org for more information today!