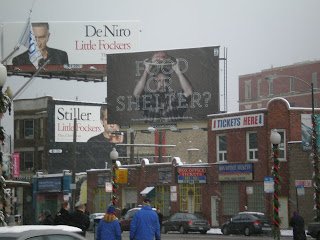 Many people in the community know the Greater Chicago Food Depository from its holiday advertising campaigns that appear on CTA trains and buses and at outdoor locations around town. I’ve met people who, when they learn I work at the Food Depository, begin quoting taglines from old ads to me. It’s amazing. We’re fortunate to have the creative services for the ads donated by the great team at Leo Burnett and to have the ad placement assistance of our friends at Starcom.

The first of the Depository’s 2010 holiday advertisements were posted last week. I drove past the intersection of Clark and Addison last Saturday and snapped the above photo in the snow. The ad reads: “Food or Shelter? No one should have to choose. Donate at chicagosfoodbank.org.” This year’s campaign highlights the difficult choices hungry people face—choices between food and medicine, food and shelter and food and heat. Featuring data from the Hunger in America 2010 study, the campaign encourages commuters to donate to the Food Depository online or via text.

Additionally, you may see ads in the Sun-Times and Tribune, and on Facebook and other prominent websites. On Dec. 13, WXRT begins its 12 Nights of Christmas, four hours of holiday music each evening presented by the Food Depository. We look forward to hearing from you as you see and hear the ads around town!