Get involved during Hunger Action Month 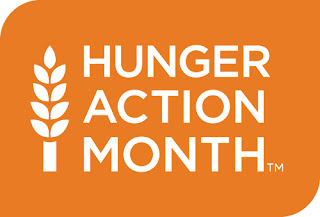 September is Hunger Action Month, which is dedicated to raising awareness and mobilizing action for the fight against hunger. This yearly effort by anti-hunger advocates arrives as the need for food assistance continues to reach record levels in Cook County, and across the United States.
On Tuesday, the U.S. Department of Agriculture released a report stating approximately 49 million individuals nationwide were food insecure at some point in 2012. The report also shows a 4 percent increase in U.S. food insecurity in the last decade. And, data released in June by Feeding America showed there are 860,670 food insecure men, women, and children in Cook County. This means 1 in 6 of our neighbors don’t know where their next meal will come from.
If we work together, we can make a difference in the fight against hunger. Join the Greater Chicago Food Depository during Hunger Action Month as we put into action our belief that no one should go hungry in our community. Here are some ways to get involved:

1. Visit chicagosfoodbank.org/advocate to find contact information for your elected officials and to sign up to receive Food Depository advocacy alerts.
2. Organize a group of volunteers to make phone calls to Members of Congress to communicate the importance of protecting federal nutrition programs.
3. Spread the word. Stay active on social media sites like Facebook and Twitter to maintain awareness in your community. Connect with other supporters by using the hashtag #HungerActionMonth on Twitter.
4. Write a letter to the editor of your newspaper about hunger in your community.
5.  Organize a local food drive and encourage other community organizations to participate.
6. Like the Food Depository on Facebook and follow @FoodDepository on Twitter.
7. Attend a neighborhood, city, or county meeting and tell attendees about Hunger Action Month.
8. Take the SNAP Challenge, and learn how difficult it is to survive on a limited food budget of $35 for the week of Sept. 16-22. Encourage others in your community to try as well.