A Taste of the Lunch Bus: Observations from A Lunch Bus Intern

When working with kids, you never know what to expect. As a former waitress I have witnessed everything from temper tantrums over chocolate milk to children who seemed like miniature adults. When I was offered the position of Lunch Bus intern at the Greater Chicago Food Depository this summer, I had no idea what to expect. I had fed kids before, but not kids who may not have had breakfast; not kids who might not eat lunch at all without me.

Many children in the city go without regular meals when school is out for the summer. Maybe they are home alone all day and do not have food in the house. Maybe their parents are out of work and can only provide a meal or two per day. Whatever the reason, no child is at fault for his or her hunger. It was this that drew me to the Lunch Bus. Recently graduated from a university committed to a tradition of community service, I loved the idea of sharing my time and energy with these kids.

On my first day, the first four stops were very slow, some with no children at all. I was devastated and confused. Where were all the children? What was the point of spending my summer giving out meals when no one even showed up? I got my answer at the sixth stop. As we rounded the corner to Miami Park in Little Village, there they were. Droves of children were playing on the playground, but the moment they saw the Lunch Bus with the Food Depository logo, a cheer went up and a line immediately formed. The children were all smiles as they scribbled their names on the sign-in sheet. No one fought in line, and they were excited to try the new food. As we prepared to travel to our next stop, Ms. Dixon, the volunteer driver helping me that day, turned to me and said, “I told you they’d be there. They’ll all be like that pretty soon.” 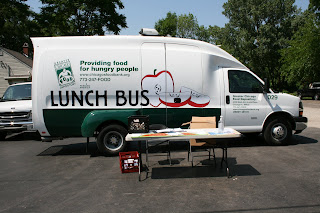 Allison Lantero is the City Route Lunch Bus intern at the Greater Chicago Food Depository. The Lunch Bus returned in June, expanding its city and South Suburban routes to include a total of 15 sites across Cook County. Throughout the summer months the program will distribute approximately 15,000 meals reimbursed by the Illinois Board of Education. With the help of Food Depository interns and volunteers, the Lunch Bus visits sites in underserved neighborhoods to deliver healthy food directly to children. The Food Depository identified priority areas for the Lunch Bus based on the Running on Empty study of child hunger, released in 2010.